Dec 19, 2007 - Alice Springs, Northern Territory, Australia - Australia's 460,000 Aborigines make up about two percent of its 20m population. They are consistently the country's most disadvantaged group. At the roughly 18 communities surrounding the town of Alice Springs, many social problems exist among the 3,000 Aborigines living there, with high rates of alcohol abuse, child abuse, and domestic violence. Aborigines continue to live in Third-World conditions in a First-World country despite a government drive to improve their lives. Although millions of dollars have been poured in, little has changed in over a decade. One Aboriginal person dies an alcohol-related death every 38 hours in the Northern Territory. In August, Alice Springs became a dry town, in an effort to stunt the abuse of alcohol, but little has changed in the wake of the ban. The government has also started quarantining the welfare funds of the Aboriginal population, so that the money can be spent only on food and necessities. Even after 40 years of landmark voting, when Aborigines were first recognized as full Australian citizens, countless 'Town Camps' and remote communities are still marked as blank on many maps. For now, what many call home is a littered patch of dirt on the outskirts of town, where feral dogs wander through thousands of empty beer cans. Hope for change seems as though it is a distant mirage. Newly elected Australian leader Kevin Rudd publicly apologized to indigenous Aborigines for past indignities. Pictured: Young Aboriginal cousins from Left: Jessica Thompson, 4, Georgie Roberts, 3, and Annie Thompson, 6, at Hoppy's 'town camp' on the outskirts of Alice Springs. (Credit Image: © Marianna Day Massey/ZUMA Press) 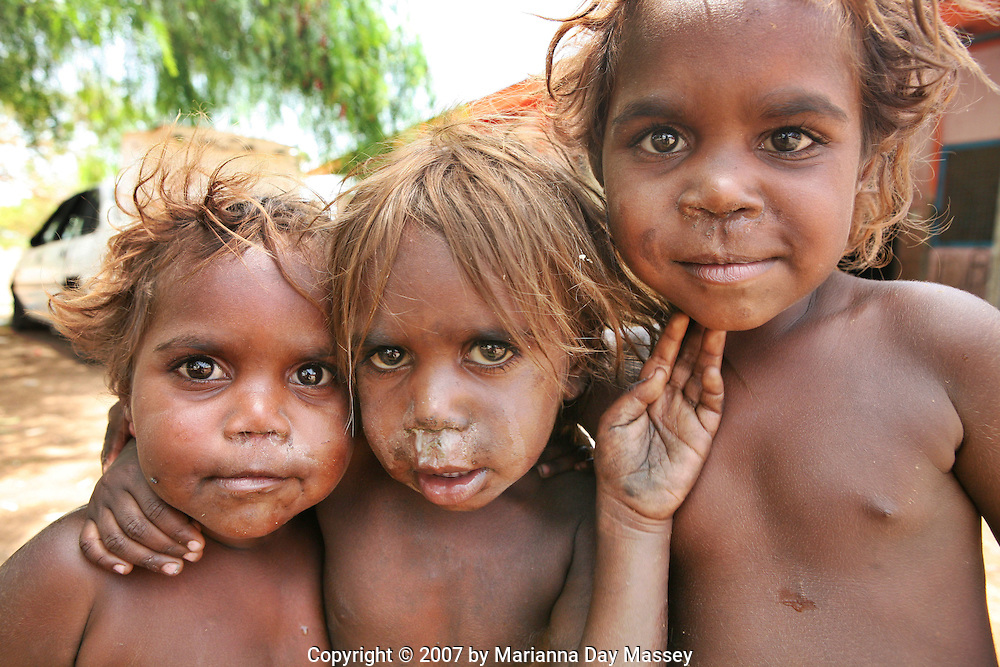