Feb 27, 2006; Mojave, CA, USA; Tehachapi-Mojave Wind Resource Area -The Tehachapi Pass is one of the world's largest producer of wind-generated electricity. The more than 5,000 wind turbines in the Tehachapi-Mojave wind resource area of Kern County generate approximately 1.3 Terawatt-hours (1,300,000,000 kWh) per year. This is enough electricity to meet the residential needs of more than 500,000 Southern Californians or nearly one million Europeans. Collectively the wind turbines generate electricity much like a conventional power plant except that their fuel - the wind - is both free and inexhaustible. Since they are open-air power plants the term wind power plant or wind power station is more descriptive than the term, wind farm, sometimes used. The wind power plants sell their electricity to Southern California Edison. The utility then distributes the electricity as it would that from any of its own power plants. On a moderately windy day Tehachapi's wind turbines will meet the needs of the entire Antelope Valley and export electricity to Los Angeles. By producing electricity cleanly California's wind power plants reduce pollutant gases that contribute to smog, acid rain, and global warming.Each year Tehachapi's wind power plants prevent the emission of more than 3 billion (3,000 million) pounds of sulfur oxides, nitrogen oxides, particulates, and carbon dioxide that would otherwise be produced. Wind power plants produce about 1% of the state's electricity. As a state with 10% of the nation's population and the world's seventh largest economy, California uses a staggering amount of electricity. California emits nearly as much global warming gases as the entire nation of France. Mandatory Credit: Photo by Marianna Day Massey/ZUMA Press. ( 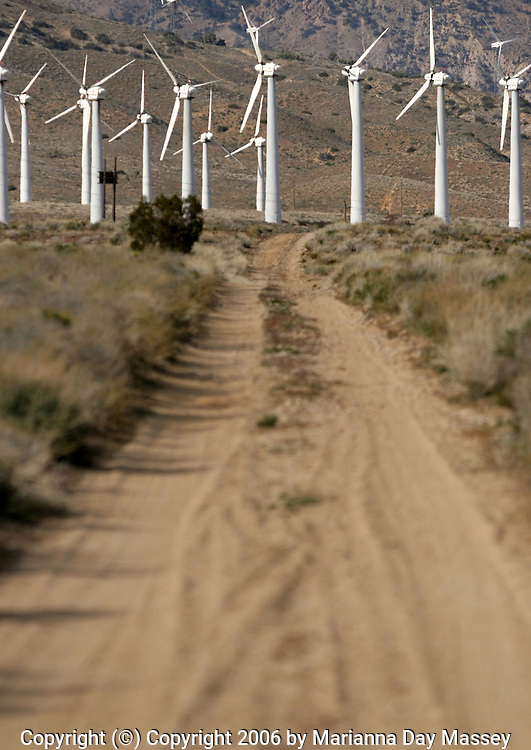